Upon the recommendation of friend and colleague, Virginia Jardim, while in India I visited a community of painters and sculptors who were at the forefront of the Indian Modernist Movement in the 1950's-80's. They live together just 25 minutes south of Chennai in a place called Cholamandal Artist Village. I arrived at their museum with a friend via a hired car, and was greeted by the manager, S.Nandagopal. Since we had exchanged emails before my visit, he was so kind as to insist on refunding our tickets (R20 each) and give us a guide who introduced us to four resident artists. 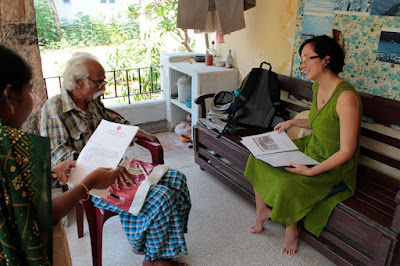 This is D. Venkatapathy, a painter whose shock of while hair only serves to underscore his intensity. He told me about the beginning of the artist village, how they built everything from scratch with the help of some government funding and visiting artists and architects from India, Europe and North America. 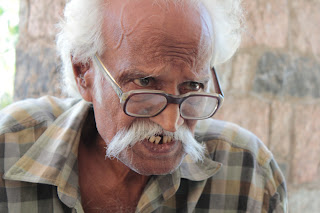 Then I walked down the dirt street to a house with a large outdoor workshop full of half-hewn bodies in stone.  Here, I chatted with Nupur Chatterjee and Rajasekaran Nair in their home studio, a cool, cozy brick abode that feels somewhat medieval with the brick cobwebs encircling their cast iron and granite sculptures adorning every nook and cranny. 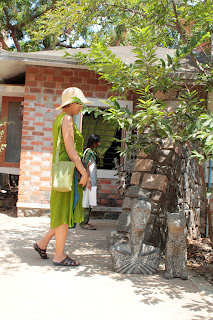 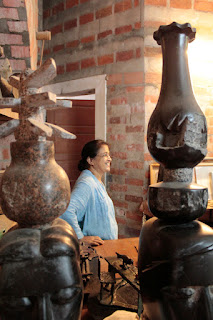 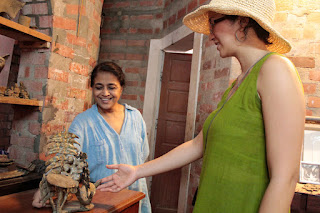 Nupur Chatterjee works with metal. Her work is small, taking inspiration from forest floors strewn with mushrooms, tree sprouts, and leaves. (She also has a fondness for drawing cats, and unfortunately I don't have a picture of them here.) She studied at the Shantiniketan Campus of Viswa-Bharati University, founded by Nobel laureate Rabindranath Tagore. She came to Chennai after graduation, upon hearing about what the artists were trying to establish here and has been here for over 7 years. 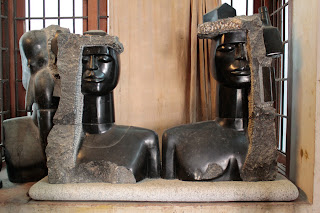 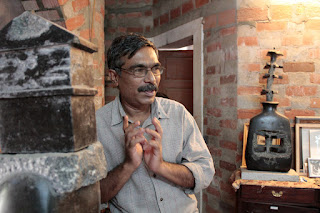 Her partner, Rakasekaran Nair, sculpts semi-figurative granite forms that are more monumental and stark in their polished black and rough grey surfaces. "The work is time-consuming and difficult," he tells me. "Granite is the hardest stone." His figures remind me of the soul, sinuous forms breaking free or emerging from the restrictions of stone. Like metaphors for the mind. 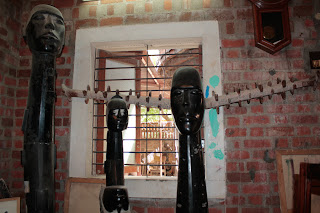 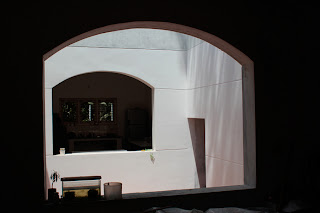 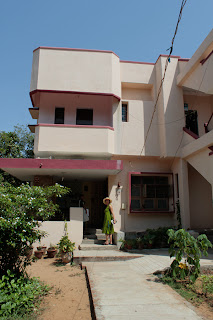 This is the self-designed home of the painter P. Gopinath, who was also one of the first artists to settle at Cholamandal Village. Originally from Kerala, he came to study with the founder K.C.S. Paniker (1911-1977), and has since taken a leadership role in the community. His beautiful studio is filled with expansive windows to maximize airflow and light. 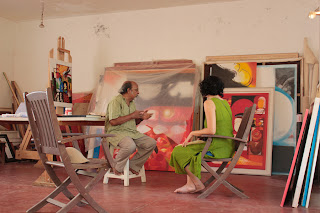 His work is saturated by the colors of the earth here (which is often a gorgeous orange) and the spices and surroundings of his native Kerala. 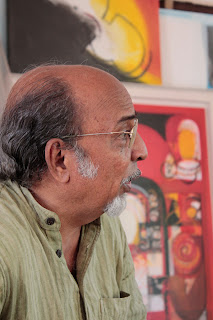 Two hours south of Chennai on the southeastern coast of India is a town called Auroville. In stunning contrast to the surrounding region, Auroville is thoughtfully planned, clean, and international. A number of buildings and street lights are solar powered. The town is run more like a collective than an oligarchy.

Much of the food available is organic and delicious. They have outdoor exhibits featuring the far-off cultures like Khazakstan and Tibet, as well as advancements in green technology.

It is here that Kenji Matsumoto moved from Japan with his wife, Ikebana teacher Valeria Raso, over 10 years ago. He began by using the large knarled roots of felled trees to create highly original stands for Valeria's ikebana arrangements. When the stands became popular, Kenji expanded into tables--creating one-of-a-kind furniture  pieces of exquisite beauty by hand. 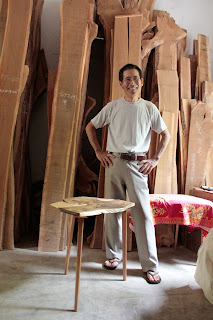 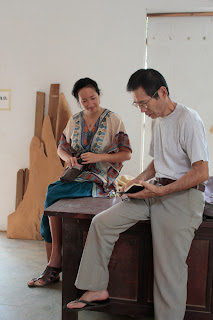 Being June, I was visiting during the hot off-season when Kenji's studio happened to be on break. His apprentices were away and the shop had been quiet. Still, he generously opened it up to show me his tools and talk about his work. 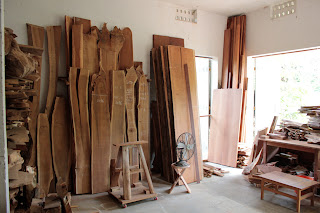 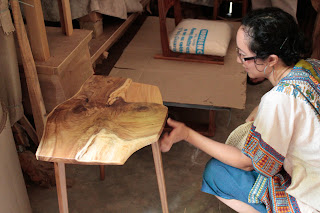 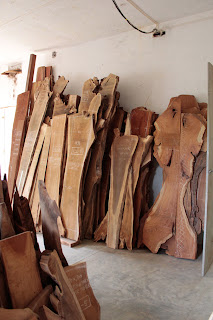 Kenji's process is intuitive. He looks at a raw piece of wood and designs from the existing patterns in its grain. Rather than shave off what others would consider irregularities, he brings them out as beautiful forms. He is a sculptor in collaboration with nature. 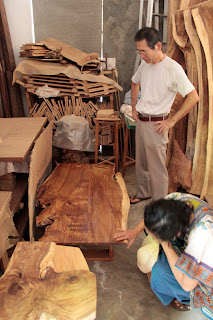 I asked Kenji how his work is received in India. He said, like the Japanese, Indian people have a very close and spiritual relationship with nature. Thus, they have an appreciation for pieces that reflect nature's beauty and want such things in their home. The people who commission and purchase his work love that each piece is one-of-a-kind. Such furniture is not as common in India as it might be in Japan and other East Asian countries, where this aesthetic and craft has developed over hundreds of years. 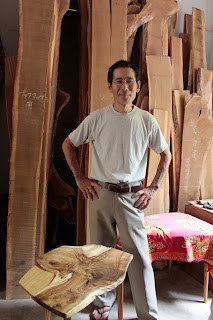 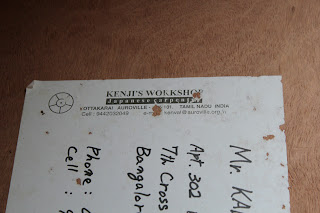 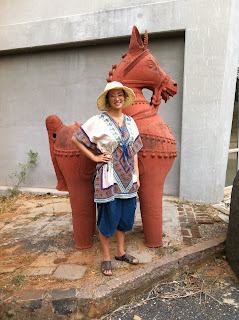 All other photographs by B.A.M.

Posted by Minette Lee Mangahas at 1:44 AM No comments: